The London Interbank Offered Rate, commonly known as Libor, has been in the news this year because of allegations that a number of banks tried to manipulate it during the 2007–2009 financial crisis. If you are not familiar with Libor, you may wonder what it is and how it might affect your own financial situation.

Libor is the average interest rate at which creditworthy banks can borrow funds from each other on the London market. In this sense it is similar to the U.S. federal funds rate at which Federal Reserve banks can borrow from each other.
Whereas the federal funds rate is based on a target rate set by a government body (the Federal Open Market Committee), Libor is determined by a private organization (the British Bankers’ Association). It is calculated each business day in 10 currencies and 15 maturities based on input from a panel of banks for each currency.1
Libor is a widely used global benchmark for short-term interest rates, serving as a reference for more than $350 trillion worth of securities, including non-federal student loans, credit cards, and certain trading instruments.2
The federal funds rate and Libor generally follow a similar pattern and are typically quite close to each other. In late 2007 and 2008, however, there were a number of unusual spikes in the U.S. dollar overnight Libor (see chart). Although high rates could have a negative impact on consumers, the primary allegation has been that banks tried to keep Libor artificially low to mask their own financial status and boost traders’ profits, which actually might have been helpful to some consumers.3 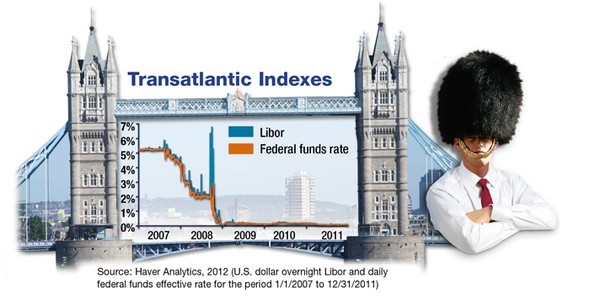 Reforms in the way that Libor is calculated began in December 2008.4Investigations, regulatory action, and further reforms could continue well into the future. All investments are subject to market fluctuation, risk, and loss of principal. When sold, investments may be worth more or less than their original cost.
1) British Bankers’ Association, 2012
2–3) forbes.com, July 26, 2012
4) The New York Times, July 24, 2012
The information in this article is not intended as tax or legal advice, and it may not be relied on for the purpose of avoiding any federal tax penalties. You are encouraged to seek tax or legal advice from an independent professional advisor. The content is derived from sources believed to be accurate. Neither the information presented nor any opinion expressed constitutes a solicitation for the purchase or sale of any security. This material was written and prepared by Emerald. Copyright © 2013 Emerald Connect, Inc.