QE3: Is the Third Time the Charm?

Home / QE3: Is the Third Time the Charm?

On September 13, the Federal Reserve announced a third round of quantitative easing — dubbed QE3 — aimed at stimulating the still-struggling U.S. economy. In this initiative, the Fed plans to purchase $40 billion in mortgage-backed securities each month until the employment situation shows satisfactory improvement. The central bank also extended “Operation Twist” — an exchange of short-term Treasuries for bonds with longer maturities — through the end of 2012 and pushed back the horizon on maintaining “exceptionally low levels for the federal funds rate…at least through mid-2015.”1 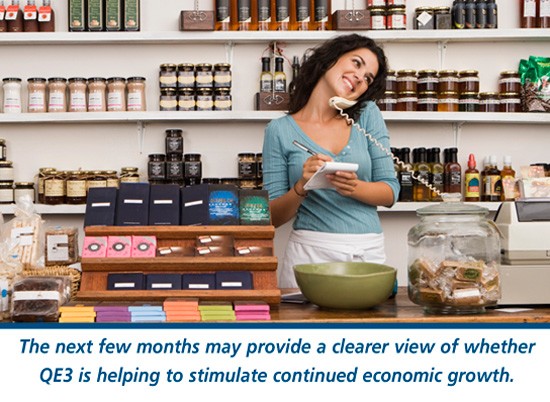 Large-scale economic levers can seem abstract, but as a consumer and investor, you may want to consider the potential impact of the Fed’s moves on the U.S. economy and your personal financial situation.

Quantitative easing refers to increasing the supply of money in the national economy. Although critics may deride it as “printing money,” the Fed’s QE programs have not actually increased the available currency. Rather, the Fed generates funds electronically and credits the accounts of the banks from which it buys securities, with the goal that banks would use the funds to provide loans to businesses and consumers.

Historically, the Fed’s primary economic lever has been to lower short-term rates by setting the target for the federal funds rate, which has ranged from 0% to 0.25% since December 2008.2 In late November 2008, in an effort to lower longer-term rates and stimulate the housing market, the Fed launched QE1, which grew as the economy continued to struggle and led to the purchase of $1.25 trillion of mortgage-backed securities by March 31, 2010.3During this period, the average 30-year fixed-rate mortgage fell from 6.33% to 5.0%, but the housing market remained stalled.4 Beginning in July 2009, the economy began to grow, but it’s unclear how much of this can be attributed to the Fed’s actions.5
In late April 2011, with the economy slowing down, the Fed implemented QE2, purchasing $600 billion of longer-term Treasuries with new money. Operation Twist, launched in September 2011, also targets longer-term rates, but unlike the QE programs it has not added to the money supply.6
The effect of these policies has been limited because banks have remained cautious about lending, and businesses have been slow to invest and increase hiring. This hesitation has been driven in part by tighter bank lending standards and by higher productivity and lower payrolls for American businesses.7–9

QE3 differs from previous initiatives in that it has no dollar limit or defined end point. During the first month of the program, the average 30-year fixed-rate mortgage dropped from 3.55% to an all-time low of 3.36%, although it is too early to gauge the full effect.10
Some analysts believe that mortgage rates may continue to fall, which could stimulate the housing market and have a positive effect on employment.11 Of course, it could also be a good time for homeowners to consider refinancing.

The biggest criticism of the QE program is that it may stimulate inflation. However, moderate inflation is necessary for growth, and the 2% annual inflation rate through the end of September 2012 corresponds with the Fed’s target rate.12 William Dudley, president of the New York Federal Reserve, recently said that the Fed’s ability to adjust short-term rates “means we can keep inflation in check.”13
A secondary issue is that the Fed’s holdings are expanding; they reached $2.81 trillion by mid-October.14 Fed Chairman Ben Bernanke has voiced concern that the central bank is being forced to play too large a role due to a lack of action by Congress, and that the Fed’s large holdings could have unintended consequences — though he has seen “few if any problems” so far.15–16
One effect is almost certain: Interest rates will probably remain low for the foreseeable future, which aids borrowers but minimizes the return on lower-risk savings vehicles that many retirees rely on for income. In a recent poll, 73% of nonretirees said that low rates are good for consumers and business borrowers and the benefits outweigh the risks, but only 47% of retirees shared this point of view.17
The next few months may provide a clearer view of whether QE3 is helping to stimulate continued economic growth. Keep in mind, of course, that the economy is just one of many variables to consider when reviewing your personal financial situation.
1–3, 6) Federal Reserve, 2008–2012
4) bankrate.com, September 21, 2011
5) U.S. Bureau of Economic Analysis, 2012
7) Financial Times, October 15, 2012
8, 15) CNNMoney, September 13, 2012
9) Associated Press, September 5, 2012
10–11) barrons.com, October 13, 2012
12) U.S. Bureau of Labor Statistics, 2012
13–14) Reuters, October 16, 2012
16) bloomberg.com, September 18, 2012
17) Gallup, June 7, 2012
The information in this article is not intended as tax or legal advice, and it may not be relied on for the purpose of avoiding any federal tax penalties. You are encouraged to seek tax or legal advice from an independent professional advisor. The content is derived from sources believed to be accurate. Neither the information presented nor any opinion expressed constitutes a solicitation for the purchase or sale of any security. This material was written and prepared by Emerald. Copyright © 2012 Emerald Connect, Inc.