The Great Recession affected the full spectrum of the U.S. economy, but the impact on the manufacturing sector was especially strong. Production dropped by more than 20%, and nearly 2.3 million manufacturing jobs were lost.1–2

The good news is that manufacturing production is climbing toward pre-recession levels, increasing at an annual rate of 10.4% in the first quarter of 2012.3 Although hiring tends to lag production (and some jobs may be permanently lost), 470,000 manufacturing jobs were added between January 2010 and March 2012.4
It seems clear that industrial production is rebounding from the effects of the recession. The larger question is whether the current trend may gain momentum and lead to a renaissance for American manufacturing. 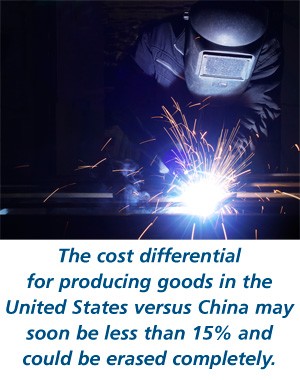 U.S. manufacturing employment reached a peak of almost 20 million jobs in 1979, then began to decline as the country weathered two successive recessions between 1980 and 1982.5The real turning point came two decades later when the United States and China normalized trade relations in 2000. This was heralded as a historic moment that might open the huge Chinese market to American goods, but the more immediate impact was the migration of U.S. factory operations to China, with the loss of more than 3 million jobs through 2008.6
The driving force in this exodus, of course, was the wage disparity between Chinese and American workers. In 2000, the average factory wage in China was the equivalent of $.52 an hour, about 3% of what the average U.S. factory worker earned. That has changed as Chinese economic development spawned annual double-digit increases in the cost of wages and benefits.7

By 2015, the average hourly wage in the Yangtze River Delta, the heart of Chinese high-tech manufacturing, is expected to reach $6.31. Adding to the equation is a weaker dollar and the fact that American labor unions have exhibited a greater willingness to accept lower wages than in the past, due in part to Chinese competition. If the U.S. succeeds in loosening China’s manipulation of trade policies, the cost difference could be even less.8
Wages account for only 20% to 30% of typical production costs, so as the wage gap narrows, American manufacturers are considering the benefits of local production.9 Rising oil prices have added significantly to transportation costs, and U.S. production reduces fulfillment time, improves quality control, and adds a “Made in USA” label that appeals to many consumers.10
A recent study suggests that the cost differential for producing goods in the United States versus China may soon be less than 15% and could be erased completely.11
Although other low-cost countries — such as Vietnam, Thailand, and Indonesia — may pick up some production from China, they currently lack the labor skills, supply chain, and infrastructure to replace China’s global manufacturing role.12

The Future of Reshoring

Relocation of factories to America — termed reshoring — is still a trickle, and it’s unlikely that the manufacturing workforce will ever return to its apex of the late 1970s. Despite lower payrolls, production has grown steadily due to labor-saving technology. The average American factory worker now produces about $180,000 worth of goods per year — more than three times the production in 1978 (in today’s dollars).13
Labor-intensive, high-volume goods such as clothing and television manufacturing will probably remain overseas. However, higher-skilled, lower-volume manufacturing, such as household appliances and construction equipment could return to the United States.14 Although the U.S. may face a challenge to supply qualified workers after moving away from vocational training, it is more likely to do so than is China.15–16
To offer some historical perspective, the number of U.S. factory workers in March 2012 was about 12 million, the same as in May 1941 when the nation was building industrial capacity in anticipation of entering World War II.17Since that time, the population has grown by 180 million and the economy has shifted toward the service sector.18–19
Factory jobs may never play the same role in the United States as they once did. But a more widespread return of U.S. manufacturing, along with increased competitiveness in the export market, could generate up to 3 million new jobs, lower the unemployment rate by 2%, and decrease the trade deficit over the next three years.20
To sweeten the pot, the proposed FY 2013 budget offers tax incentives to companies that relocate operations to the United States.21 The potential renaissance of American manufacturing is likely to be the subject of political discussion and bears watching over the next few years.
1, 3) Federal Reserve, 2012
2, 4–6, 17) U.S. Bureau of Labor Statistics, 2012
7–8, 20) MSN Money, April 11, 2012
9, 11–12, 14, 16) Boston Consulting Group, 2012
10, 15) inc.com, February 1, 2012
13, 21) The New York Times, April 3, 2012
18) U.S. Census Bureau, 2012
19) U.S. Bureau of Economic Analysis, 2012
The information in this article is not intended as tax or legal advice, and it may not be relied on for the purpose of avoiding any federal tax penalties. You are encouraged to seek tax or legal advice from an independent professional advisor. The content is derived from sources believed to be accurate. Neither the information presented nor any opinion expressed constitutes a solicitation for the purchase or sale of any security. This material was written and prepared by Emerald. Copyright © 2012 Emerald Connect, Inc.