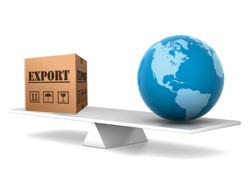 Rising exports have generated nearly half of U.S. gross domestic product (GDP) growth since the recession ended in June 2009.3 Sales of U.S. goods and services abroad surged 29% in the first nine quarters of the recovery, as manufacturers took advantage of stable demand from developing nations in Asia and Latin America. In fact, emerging markets now receive 55% of U.S. goods shipments (up from 40% in 2000).4
Investors who follow the balance of trade may also be interested in some other recent shifts in the exports sector, including the federal government’s efforts to stimulate the domestic economy by removing barriers to trade and expanding global trading opportunities.

When the economy imports more goods and services than it exports, it creates a trade deficit. The United States has run prolonged trade deficits since the 1970s, when the price of imported oil began to surge along with U.S. demand for oil and other foreign-made goods such as cars and electronics.
U.S. imports tend to grow when the economy grows, because consumers may have more money to spend on goods and there is often more demand for foreign oil. But this pattern did not reappear in 2011; the economy grew slowly (at an annual rate of 1.8%) in the third quarter, even as the trade deficit narrowed.5–6

U.S. exports to China and Chinese imports both rose to record high levels near the end of 2011, but the imbalance continued to grow in China’s favor. Despite the shrinking national trade gap, the trade deficit with China was forecasted to end the year as the highest ever with a single nation.7
There was another interesting development in 2011 regarding international trade. By processing crude oil for growing nations such as Mexico and Brazil, the United States became a net exporter of petroleum products for the first time since 1949.8 Meanwhile, the United States is still the world’s largest importer of crude oil.9 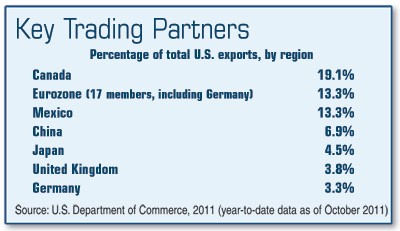 In March 2010, President Obama signed the National Export Initiative, an executive order intended to promote international trade and provide assistance and financing for small businesses that want to enter foreign markets. In pursuit of the president’s stated goal to double exports by 2015 (from 2009 levels), U.S. trade officials have recently forged some of the most significant trade agreements in years.10
In October 2011, Congress passed new trade pacts with South Korea, Colombia, and Panama. Upon their implementation, the United States will have trade agreements with 20 countries. The United States is also participating in negotiations for a Trans-Pacific Partnership with nine nations (including Australia, Chile, Peru, and Singapore) — a robust region that represents more than 40% of global trade.11
A recession in Europe or high oil prices could affect the balance of trade, because U.S. export growth typically depends on the health of our trading partners and the strength of the dollar. Consequently, fast-growing emerging markets and a relatively weak dollar help explain why healthy U.S. exports have been a more important contributor to economic growth than they were in the wake of any other recession since World War II.
Investing internationally carries additional risks such as differences in financial reporting, currency exchange risk, as well as economic and political risk unique to the specific country. This may result in greater share price volatility. Shares, when sold, may be worth more or less than their original cost.
1, 6) U.S. Department of Commerce, 2011
2–4, 8) Bloomberg.com, December 5, 2011
5) U.S. Bureau of Economic Analysis, 2011
7) thehill.com, December 9, 2011
9) The Wall Street Journal, November 30, 2011
10) Whitehouse.gov, 2010
11) Office of the U.S. Trade Representative, 2011
The information in this article is not intended as tax or legal advice, and it may not be relied on for the purpose of avoiding any federal tax penalties. You are encouraged to seek tax or legal advice from an independent professional advisor. The content is derived from sources believed to be accurate. Neither the information presented nor any opinion expressed constitutes a solicitation for the purchase or sale of any security. This material was written and prepared by Emerald. Copyright © 2012 Emerald Connect, Inc.