Rediscovering Fossil Fuels: Could the Energy Boom Transform the Economy? 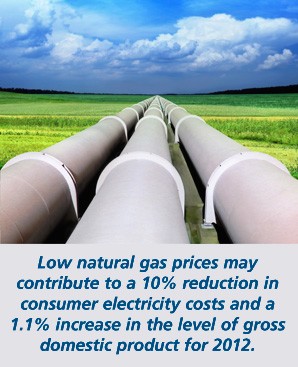 Growing demand from developing economies caused global oil prices to rise 265% in the last 10 years. A decade of rising fuel prices often made life more difficult for many U.S. consumers and businesses, and occasionally put unwelcomed strain on the nation’s economy.1

High prices and profits, however, helped make it feasible for energy companies to invest in exploration and research. Consequently, new technologies have allowed the energy industry to access game-changing deposits of crude oil and natural gas in the United States.
A domestic fossil fuel boom is also leading to changes in electricity production, manufacturing, transportation, and other domestic industries that could have a positive effect on U.S. economic growth in the years ahead. Here is a closer look at the discoveries and trends that are behind the shale energy boom, and what the shift could possibly mean for consumers, businesses, and the nation.
Domestic Oil Supplies
Using new drilling methods to tap into the Bakken Formation in North Dakota and Montana could possibly provide as much as 10 billion barrels of recoverable oil, some of which the industry has started delivering to the global market. As a result, the United States imported only 42% of the oil it used in the first four months of 2012, the lowest level in two decades.2
To the disappointment of many American consumers, increased oil production has generally not resulted in lower gasoline or heating oil prices. Greater foreign demand has been blamed for high retail prices and has also resulted in a surge in U.S. exports of refined fuels.3
Natural Gas Abundance
Vast reserves of shale natural gas are newly accessible through a process called hydraulic fracturing, or “fracking.” A pressurized mixture of water, sand, and chemicals is used to extract the gas from shale rock layers as deep as a mile or more below the Earth’s surface.
In the last four years, the industry has gained access to enough natural gas to supply U.S. consumers for more than 100 years (at current demand levels).4Before fracking, it was generally assumed that the nation was running out of recoverable natural gas, but it’s now producing more than ever before.
In the United States, a short-term glut and other market forces have caused natural gas prices to fall about 86% from highs hit during the middle of the last decade. Natural gas currently sells for about one-fourth of what it does in Europe and Asia.5
Environmental Pressures
If fossil fuel costs stay lower and more stable, it could undercut and slow the growth of renewable energy sources such as solar and wind. Green products such as home solar panels and hybrid and plug-in electric cars might also need to fall in price in order to remain competitive.6
Burning natural gas emits much less carbon than burning oil or coal, but fracking methods have raised some safety concerns. The Environmental Protection Agency and other scientific groups are currently studying how drilling and extraction may affect air and water quality. A few states and municipalities have banned hydraulic fracturing due to environmental issues.7
An Energy-Driven Recovery?
To help reduce pollution, many utility companies have switched from coal to gas to generate power. Cheaper gas acts as an incentive to convert additional coal-fired plants. In fact, 80% of future electricity generation is expected to come from natural gas.8
Chemical companies use fossil fuels as a raw material, and all types of manufacturers need energy to power production plants. It’s possible that a more predictable, affordable fuel supply would make it cost-effective to build or expand production facilities on U.S. soil.
Compressed natural gas (CNG) can be used to power some vehicles. As a result, lower fuel costs could also benefit businesses in any industry for which fuel is a major expense — shipping, trucking, construction, and waste management, to name a few.
Low natural gas prices may contribute to a 10% reduction in consumer electricity costs and a 1.1% increase in the level of gross domestic product for 2012.9 Going forward, global forces will continue to affect fuel prices, but becoming more energy independent could help strengthen the U.S. economy.
1–2, 5–6) smartmoney.com, July 9, 2012
3) The Wall Street Journal, December 30, 2011
4, 7, 9) CNBC.com, June 20, 2012
8) CNNMoney, June 27, 2012
The information in this article is not intended as tax or legal advice, and it may not be relied on for the purpose of avoiding any federal tax penalties. You are encouraged to seek tax or legal advice from an independent professional advisor. The content is derived from sources believed to be accurate. Neither the information presented nor any opinion expressed constitutes a solicitation for the purchase or sale of any security. This material was written and prepared by Emerald. Copyright © 2012 Emerald Connect, Inc.