The Dow Then and Now

Home / The Dow Then and Now 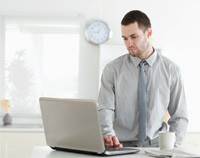 If you’re like most investors, you probably pay at least some attention to the Dow Jones Industrial Average (DJIA). For more than a century, the Dow has been a symbol of the U.S. stock market. It’s so ingrained in American financial thinking that you may not have stopped to consider what it represents and how accurately it may reflect broad market trends.

The DJIA was established in 1896 by Charles Dow, the Wall Street Journaleditor who co-founded Dow Jones & Company with statistician Edward Jones. The original DJIA was composed of 12 industrial stocks, and the average was exactly that — a simple average of the 12 stock prices. On its first day of publication (May 26, 1896), the DJIA stood at 40.94. That summer it dropped to 28.48, the lowest point on record.1
The Dow was expanded to 20 stocks in 1916 and to 30 in 1928. At the same time, a divisor was introduced to adjust for stock splits, distributions, and substitutions — making the DJIA a market index rather than an average.2

The Dow still comprises 30 stocks, but its composition has changed to reflect the evolution of the American economy from industrial production to services. Whereas the original DJIA was made up of “smokestack” companies that produced products such as sugar, rubber, coal, and gas, the current Dow includes companies that offer insurance, banking, communications, and entertainment. General Electric is the only survivor from the original DJIA.3
Despite these changes, the Dow remains a measure of large, well-established American corporations. It does not reflect the performance of small or mid-sized companies or companies outside the United States. These trends may be measured by other indexes that do not always move with the Dow. 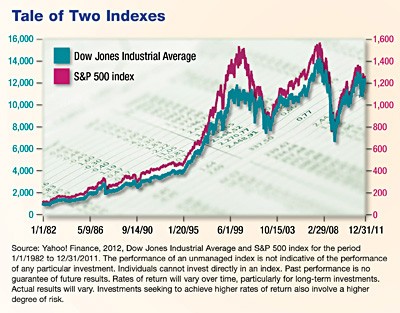 Yet even with its small sample size of just 30 stocks, the DJIA is surprisingly in tune with larger market trends. The S&P 500 index, which represents a much broader sample of large companies, generally moves in a similar pattern with the Dow (see chart). The performance of an unmanaged index is not indicative of any particular investment, and individuals cannot invest directly in an index. Past performance is no guarantee of future results. Actual results will vary.
Of course, what probably matters more to you is the long-term performance of your own investments. It’s generally not a good idea to let daily changes in the Dow influence your investment decisions. It may be wiser to develop an appropriate strategy for your personal situation and risk tolerance, and allow your investments to pursue growth over time.
One lesson to learn from the long history of the Dow is that the American economy keeps on growing. Since its debut at 40.94 on May 26, 1896, the Dow had gained more than 30,000% by May 26, 2012, when it reached 12,454.83.4–5

1–4) Dow Jones Indexes, 2012
5) Yahoo! Finance, 2012
The information in this article is not intended as tax or legal advice, and it may not be relied on for the purpose of avoiding any federal tax penalties. You are encouraged to seek tax or legal advice from an independent professional advisor. The content is derived from sources believed to be accurate. Neither the information presented nor any opinion expressed constitutes a solicitation for the purchase or sale of any security. This material was written and prepared by Emerald. Copyright © 2012 Emerald Connect, Inc.